See Also: Jamaican Cuisine & Culinary Delights.
The entire continent of Africa has had a significant influence on every aspect of Jamaican culture. Food is no different. The importation of enslaved people from Africa, especially after the English gained power in 1655, led to a large number of Africans on the island and even today most Jamaicans are of African descent.

Having been taken from their home, with only a few familiar plants to work with, the Africans had to use what was available to them and prepare it in the ways they knew how. Using the food of the land, the food they brought with them and the food provided by their masters they were able to create a fusion like no other when cooked with the methods from their native home.

What Did They Eat?

It was expected of slave owners to supply the enslaved persons with cured meat, usually salted fish or meat at least once per year. They were in turn expected to supplement their diet with ground provisions. Staples from back home such as yams, coco and okra were combined with the salted meat or fish to prepare one-pot meals or some combination of the items. Soups were popular one-pot meals as it was filling and not that difficult to prepare. They incorporated ground provisions, cured meat, different peas and beans into this one tasty dish.

How Was The Food Prepared?

To cook their meals, the Africans used long wooden utensils, a large three-legged iron pot, a grate (grater), a mortar and pestle. All of these, with the exception of the three-legged pot, are still common household items on the island.

The Origin of Our National Dish 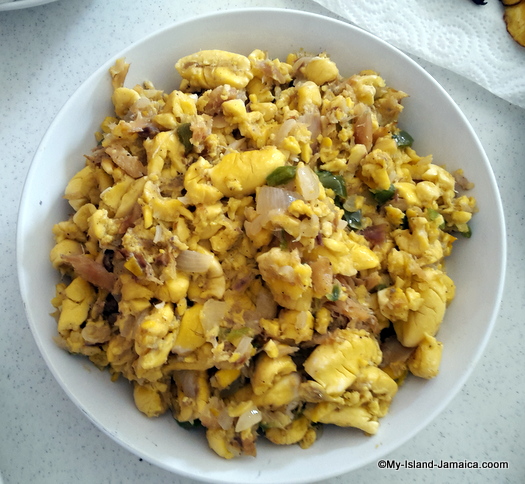 It was one of these combinations that gave us the very popular and very tasty national dish of ‘Ackee and Saltfish’. The combination of the salty, cured fish with the buttery texture of the Ackee created something spectacular. The plant was brought to the island from Africa by Henry Bligh on a trip from the continent to the island. The preparation of Ackee and Saltfish, the Ackee especially, took skill as the fruit could be poisonous or even deadly if not prepared correctly. Other notable dishes include Saltfish Fritters (Stamp an’ Go), or Mackerel Rundown (Dip and Fall Back). All this could be washed down with a refreshing drink of natural fruit juice or wet(unrefined) sugar and water.

Although certain foods were not always readily available to them, the Africans were able to replicate favourites from home such as fou-fou. Usually made with plantains and cassava, it is made from yam or breadfruit in Jamaica. 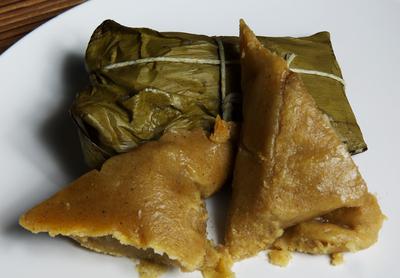 Photo: Jamaican Dessert - Dukuno
Dessert items like ‘blue drawer’s, also known as ‘tie a leaf’ or ‘duckunoo (dukunu), was created by the genius of our African ancestors and are still very popular favourites today.

The Origin of Jerk

Another Jamaican staple is jerked meats. This method of preparing meats came from the Coromantee hunters in West Africa. When some of these hunters were brought to the eastern section of Jamaica, mainly in the areas we now know as Portland, they took with them the method of roasting meats over hot coals in pots buried into the ground and covered with branches, preferably green pimento. The meat could then be cooled and reheated as needed. This style of cooking was ideal for runaway slaves who made well-disguised villages in the hills. The runaways, called Maroons, would usually have to hide in the hills from English soldiers. So, in an effort to keep their location a secret, they would practice this method of cooking so as not to alert the soldiers of their location.

Interestingly, this method of cooking was only known on the eastern side of the island, in a single area of modern-day Portland which was heavily populated by the Coromantees. Now the area is called Boston Beach and it is hands down the best place on the island for just about anything jerked. The mouthwatering jerk can be had with roasted breadfruit, yam or rice and peas. The method slowly spread across the island as the Maroons travelled farther west, and is now available all across the island with very slight variations in method and flavour. Another method was also developed, that of jerking the meat in a drum cut in half and is now the most popular method and is commonly called ‘pan’. Jerked items can be easily found at restaurants, hotels and is a very popular street food in Jamaica.

The next time you savour the taste of any of these foods I hope you will recall the culinary gifts Africa passed on to Jamaica.

By the way, which of the foods is your favourite? Don't hesitate to share!

I also recommend you read Where did Jamaican ancestors came from?

Editor's Note
Do you have questions about Jamaica? Leave them right here! With well over 2000 questions already answered, chances are we can assist :-)