How To Say Hello In Jamaican 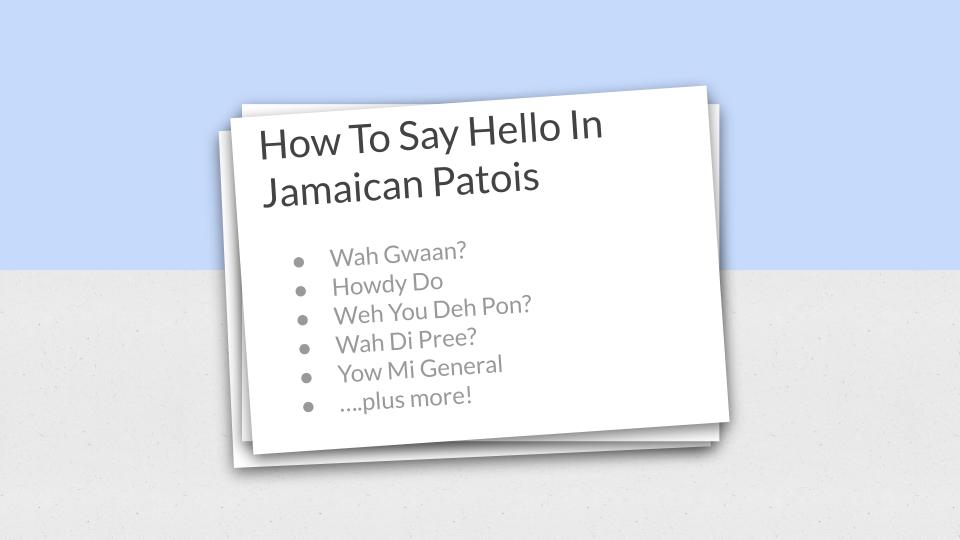 How Do I Say Hello In Jamaican Language?

Related: The language of Jamaica.

There are many ways to say hello in Jamaican patois, and new ones seems to emerge, ever so often.

Perhaps the most 'universal' though is 'Wah Gwaan', with a sort of question tone.

That greeting/ response by the way, was made even more popular after former US president, Barack Obama, used it during his inaugural visit to Jamaica on April 8, 2015.

But there are a lot more.
Let me expand on this a little more for you.

But us Jamaicans have the tendency to act as if the day has only these segments :-)

So once it’s not morning, its evening and then night. The period called afternoon is often disregarded :-)

How you are greeted in Jamaica also has lot to do with:

In the early days 'yow!’ (Hey!) was the popular expression.
It has survived several generations and is still in use currently, albeit with some modifications.
For instance there, is 'yow mi boss!’ and 'Yow mi general!' today.

Literal Translation: “Hey my boss / general".
You'll find that most youths, young men use this.

However, as I indicated to you earlier, the most generic greeting is “waah gwaan?’
Translation: What is going on?’ Interpretation: what’s up?’

And what's the response?
It is usually, 'Mid eh yah'
Literal Translation: I am here
Interpretation: "I am doing ok".

Other variations which carry the same essence include:

In both cases you are asked how you are doing and what are your plans.

You may also encounter a number of Rastafarians on the island that might greet you another way.
It may involve simple gestures such as a bow of the head, accompanied by a right hand placed across the chest touching the left breast.

Others may give a salute with a raised right fist or general conversation. Don't be alarmed, it a mark of respect. "One Love", ”blessings", or “hail” (my lord)".

To greet older persons we, as a mark of respect, address them with a good morning (good mawnin); to which any of the following gender reference are attached as appropriate: uncle, aunty, grandpa or grandma.

The greeter is simply saying that they view this individual like a family member.
Aunty and uncle is linked to middle–aged person and grandma and grandpa are for those who are much older.

These older individuals may greet you with “howdy do?”, "how you duh?", or "howdedoo?”
Literal Translation: How do you do?, How are you doing?
Interpretation: How are you getting along?


Jamaican will also ask questions quite often, “Yu gud?”
Translation: Are you good?
Interpretation: Are you alright / is everything ok with you?


The ever-popular “PSSST”, is a sometimes annoying sound guys will make to the attention of a female. Of course, you may be wondering what a typical response you could give in patois (patwah).

Patois: "What a gwaan mi general?"
English : What is going on my friend?

Patois Response : "Mi a pree fi go a di hairdressa rite ya now"
English: I am planning to go to the hairdresser right now.

Suppose you’re not having a particularly good day, how do you make that known if someone greets/ asks you?
You say...

Patios :”Nutten nah gawan”
English Translation: Nothing is happening
Interpretation: Things are not going my way

Note that when things are going right or on point, such as the hairstyle, attire, dance moves, or even a meal, you'll likely hear a younger say things like...

And finally... To part company (as I do now with you), you'll hear Jamaicans say things like:

So over to you know, go ahead and have some fun trying these at home so you can sound like a real Yardie when you get 'home'
So I say to you now... Likkle More!

I hope this was helpful. I'd love to hear from you. Please share your feedback in the comments below.

In the meantime, here also are additional resources you might find helpful.

P.S. Looking For Reasons NOT visit Jamaica? Here they are!.
Back To The Top Of This2 Page