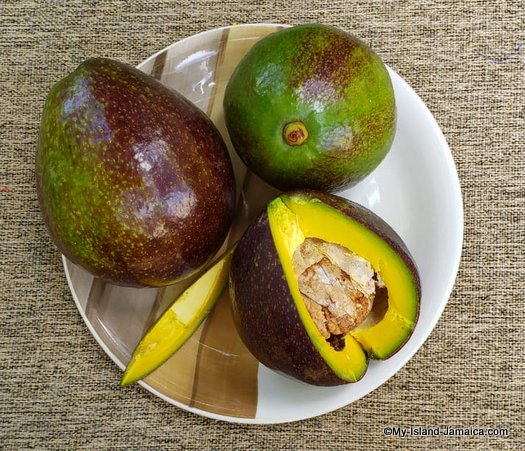 The Jamaican avocado is a large fruit with a single seed in the center of the family Lauraceae and is a close relative of Cinnamon and other aromatic trees.

For many of us though, Jamaican avocado, known locally as pear, is not just a sweet treat but a delicacy here, especially when we can't get enough out of season. But what do you know of it?

Let's take a look into what I'll call, the history of pear and how, and why, it has captured the taste buds of Jamaicans, home and abroad.

Avocado is actually a native of Mexico, where it is believed to be first cultivated around 7,000 BC, and from there spread throughout the Americas.

It was later taken to Europe by the Spaniards. The Spanish term avocado was ‘substituted by “popular etymology” for Aztec ahuacatl . . . of which a nearer form in Spanish is aguacate’ , hence "alligator pear" in Jamaican usage.

The plant grows up to 15 m high and is common in cultivation up to 1,000m. Pear literally grows wild in Jamaica, though many varieties are also cultivated. The large seeds grow easily, though hybrids will not come true.

For The Love Of Pear 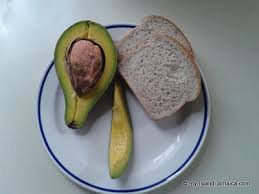 Pear is eaten here as a salad vegetable when ripe. It is most often peAeled and sliced lengthwise as an accompaniment to a meal.

Indeed, pear, which tends to fruit liberally, is also used to feed other animals, especially pigs. 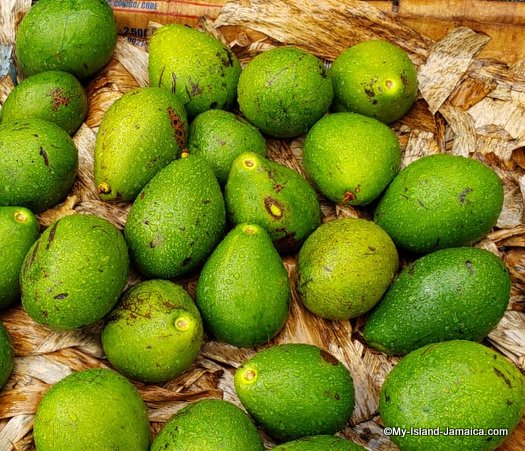 Jamaican Avocado in the Charles Gordon Market, during a raining day

In the old days, avocado was known as ‘Midshipman’s Butter’ or ‘Subaltern‘s Butter‘, because it was such a good substitute for the real thing. Charles Rampini, an English visitor, recorded in his Letters from Jamaica (1873) an anecdote about an irascible old planter who nearly dismissed a bookkeeper on his estate for eating butter at breakfast during pear season, asserting that ‘a man who can do that . . . upon the wages I give him, cannot possibly be honest’.

Rampini, like Hans Sloane who visited in the 17th century, said pear was eaten as a fruit, mixed with sugar and wine (or lemons), a usage which does not persist in Jamaica today (though Brazilians and Filipinos do eat avocado sweet).

He also noted that the seeds contains a large amount of tannin, which could be used for the same purpose as indelible ink. 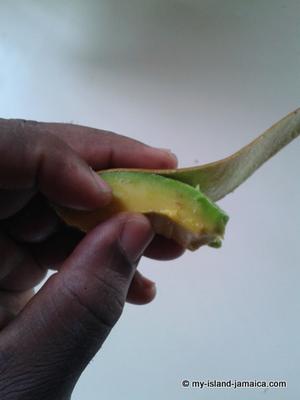 During ‘pear season’, August to December, the markets are usually flooded with the fruit in every combination of shape and size - round, oval, pear-shaped, or the easily identified, ‘alligator’, which has a long neck.

The skin of the ripe pear is either green or deep purple to black, depending on variety, and may be highly smooth and shiny or rough and bumpy. The general appearance of the skin is not necessarily a good indicator of the texture and quality of the pear inside.

To judge the degree of ripeness of a green-skinned pear requires long practice. Usually, the skin loses much of its gloss and becomes duller; the tip of the fruit near the stem usually ripens first and light pressure there may be used as a test.

The flesh varies a great deal in depth and texture, thick, blemish-free ‘butter’ pear being held in the highest esteem.

As with Mangoes, there are pear ‘aristocrats’ and common pears, and so, the supply and price varying accordingly.

Alligator and Simmonds pears are usually expensive, and so are the commercial out-of-season varieties Lulu, Collinson and Winslowson, which ripen between December and February and so extend the traditional season.

Other Health Benefits Of Jamaican Avocado 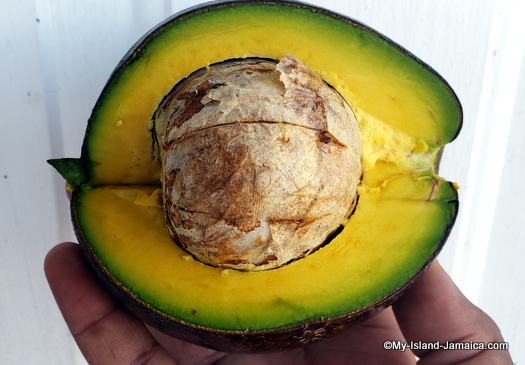 Avocado has also been used in traditional medicine, the leaves are boiled to make tea thought to be ‘good for the blood’, as a lotion for colds, and as a drink for pains.

Jamaicans for centuries have also used avocado pulp as a skin softener and hair rinse, usages that now have found commercial applications by the international cosmetics industry!

You can read more on the health benefits of avocado at HealthLine (link).

It is also believed that Jamaican avocados is  ‘a great incentive to venery’,meaning has aphrodisiac properties.

Olive Senior, in her book, Encycopedia of Heritage Jamaica, recorded that, 'Edward Long was more explicit. The fruits, he said, were considered ‘great provocatives; and, for this reason, it is said, the Spaniards do not like to see their wives indulge too much in them’.

AND... I brag even more about my Jamaican avocados here :-)

Where To Buy Jamaican Avocados

If you are in Jamaica, just head to the nearest food market in town. As long as it is in season, expect to get it.

Outside of Jamaica though it might be bit more tricky since it is a perishable item. That said, if you are in the US, UK and Canada, there are usually Jamaican and Caribbean supermarkets that stocks them in season, check those first.

Outside of that, you can also check with Amazon as well. Not only do they have limited supplies from vendors, they also have many other stuff avocado. You can check their latest prices here.

Other Pages Related To The Jamaican Avocado